The Red Dragon in Revelation

The large red dragon, with seven crowns on its seven heads from Rev. 12:3, symbolizes the (pagan) Roman empire. The banner of the cavalry of the Roman army was a red dragon. Jesus referred to this banner as the abomination of desolation in Matthew 24:15. 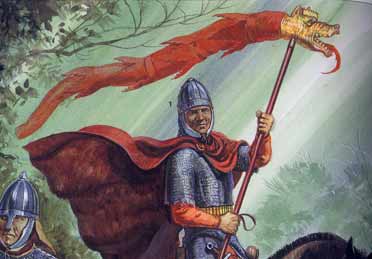 This "red dragon" conquered Palestine from the remains of the Greek Empire. Read Daniel 8:9 and 10: This Roman empire magnified itself against the Holy Land and abolished part of the governments structure of Judah: The kings (legislative and executive state power) were deposed of (Rev. 12:4).

History corroborates with this explanation without a flaw: a third part of the stars were swept away by the tail of that heathen power.
It is not written that 1/3 part of the army of Satan. Since the scene in the first 6 verses is about the attack on the Jewel Land, it must be about a third part of the Jewish leadership! Revelation gives us NO clue as to how many angels followed Satan in his rebellion. EGW talks about initially more than half, and later on she says that some of those deceived angels chose sides with Jesus again. There are places where she speaks about 1/3 of the angels following Satan, but the Bible does not sustain that understanding. It could be that verse 4 has a dual application, but from history we know for sure that Revelation 12:1-6 depicts a different war than in the rest of the chapter (12).

So, Rome established its own rulers over Judea - governors - who were not Jews. This is also the meaning of the verses in Daniel 8:9,10 - Rome fought against the children of God (heirs of heaven), conquered them, and casted some of the stars (its the leaders) to the earth (destroyed them).

Rome left the Priest class (headed by the high priest) and the religious court - the Sanhedrin - left in place. The powers of the Sanhedrin were restricted: the Jewish court was not allowed to pronounce death penalties. That is why they had to go to Pilate - the emperor's representative, for the death penalty of Jesus. The execution was therefore also done in a Roman way, by means of crucifixion. The Jewish form of capital punishment was by stoning.

This red dragon is different from the one described in Rev. 12:7-9. There it is described as 'the dragon' and Jesus himself gives the explanation - it is the snake, devil and satan.

In Rev. 13 a "sea beast" is described and a number of details becomes visible that closely resemble the red dragon in Revelation. 12:3,4 and the little horn in Daniel 8:9,10 and also the scarlet beast in Rev.17. There the woman is the (false) church, who sits on / in Rome.

On the one hand the heads are the 7 mountains on which the woman sits (Rev. 17:9). The 7 mountains are also called 'big city'. The city of Rome is known for being built on 7 hills or mountains. Vatican City - a fortified city state within Rome, is built on an eighth hill - Vaticanus Mons on the right bank of the Tiber river.

These five belonged to the past, the periods of
1. the Kings;
2. the Consuls;
3. The Decimveri (ten-manship);
4. the Dictators;
5. the Triumvirate (three man-ship);
6. One existed (still): John lived in the time of the Emperors;
7. One form of government had yet to come: the time of the Popes;
8. And the 7th will be also the 8th.

For a proper understanding of the end-time prophecy, it is important to recognize that the main characteristics of the Roman empire persist until the end of this world - the iron of the legs we find back to the feet and toes of the statue of Daniel 2.

The pope is "king" of the Vatican Empire, whose seat is in Rome. The last emperor of the Roman Empire (Emperor Justinian I, who lived in Constantinople (Turkey) - capital of the Eastern Roman Empire, after the fall of the Western Roman Empire) handed over its power and authority to the then Bishop of Rome in 538 AD. Thus, the leader of the Christian Church, got his political power and territory, in the left only city of the Western Roman Empire, Rome. Other parts of the western empire had fallen apart, which was symbolized by the 10 crowns, what later became 10 horns without crowns, i.e. they were no longer kingdoms but independent states.

In Daniel the total empire of the Western Roman empire is represented by 10 toes. We know that Europe consists of more than 10 countries now, but we also understand that borders have shifted over the centuries, through alliances, through marriages and alliances. It is the same area though that once belonged to the Roman Empire.

The Eastern Roman Empire has had little meaning in church history. That part was later taken over by the Turks, who at some point also threatened to take over the western part, when Turkey dominated the political scene in Europe. This led Uriah Smith in his time to draw the (wrong) conclusion that Turkey would be the "sea beast" of Revelation 13.

John sees that one of the 7 heads (hills, forms of government) is fatally wounded: in 1798 the pope was stripped by France of his ecclesiastical and political power. For about 2 years, the Roman church did not exist as a kingdom - Napoleon proclaimed Rome, including the Vatican City, to be a republic. The then pope - Pius VI - was imprisoned and died in exile in Ravenna. Two years later, Napoleon allows a new pope to be elected - Pius VII. However, he is completely stripped of his original authority and power.

On July 15, 1801, the Pope and the French government representatives agreed on a treaty - Le Concordat. This treaty entered into force on April 18, 1802. It meant, among other things, that the bishops were appointed by the French head of state (first one was Napoleon) and not by the pope, the pope could only confirm their appointment; the bishops had to swear an oath of allegiance to the state; they were allowed to appoint pastors, but only if the candidates had been approved by the state; the church renounced all its goods. The clergy were paid by the state. Sunday was designated as a worship day. There was then a 7 day week in addition to the revolutionary 10 day week. In short: The Catholic Church became the French state church. At the time, France was in charge in most of Europe.

Therefore, at religious and political level, this pope had nothing to say in Europe. He was only allowed to be king over his church kingdom in Vatican City, but no longer held religious rule over the kings of Europe (the 10 states). But this "wound" slowly recovered, until, in 1929, Mussolini returned to the Pope his Vatican City (Lateran Treaty) and thus restored his political power - the "deadly wound" was healed. The pope was again king in Rome. With this, the 7th "form of government" became at the same time the 8th (Rev. 17:10) and Rome gradually recovered to the global political-religious power it is today.
Vatican is official member of the UN and special adviser to the UN Security Council. There is no war contemplated, of the pope is couseled. from 2015 the world is united around the Paris Climate Agreement, an initiative of the Pope, based on his encyclic Laudato Sií (June 2015); and most recently (October 2020) the wordl i united socially around his last encyclic Fratelli Tutti.

If we want to understand the prophecies of Daniel 8, Revelation 12, 13 and 17, then it is very important to recognize that the Roman Catholic Church is, prophetically speaking, the extension of the (pagan) Roman empire. The RCC originated from Rome and is part of Rome, is a continuation of Rome - the red dragon. Scarlet is the main color of the RCC - the color of the cardinals and the pope.