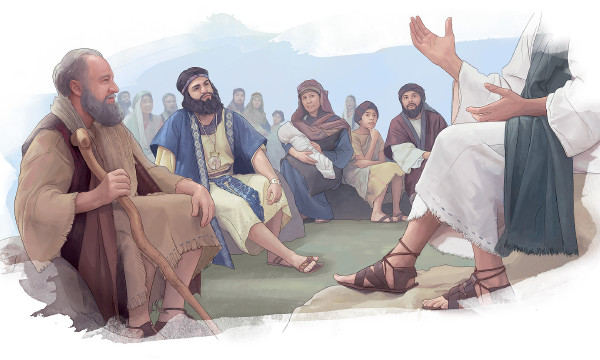 Jesus never denied His authority. He knew who He was, He knew what His task and assignment was. He begins His ministry with: "The time is fulfilled, and the Kingdom of God is at hand, repent and believe the gospel." (Mark 1:15) He was talking about

Himself. More than Abraham had come - He Who is like God. His contemporaries had a hard time with it, as did many in our time ... Passion, a beautiful, emotional story, but they do not want anything more from Him.

Do you remember the story of two disciples from Luke 24? They invited Jesus to stay with them, because that first day of the week was already over. And then He took bread, blessed it and broke it (Luke 24:30). This is indeed very unexpected! In the Jewish tradition the host always speaks the blessing and breaks the bread. Foreigners and guests wait for directions and receive in silence what is presented to them. It was clear that this was not an ordinary guest, and because of this behavior their eyes were opened, and they recognized Him (Luke 24:31).

Getsemané and the cross
1988 years ago, on Thursday, it must have been between 8-9 o'clock in the evening when our Lord struggled with the realization that He would go the ultimate way. He feared the prospect. The fear that He felt was so deep that he sweated blood. But He had to go that way for a lost planet, for people who had become entangled in their loyalty to sin. He accepted a bitter cup that night so that everyone who believes would not be lost and have to experience the same thing.
His fellow believers have mistreated Him all night, until sunrise, although they knew that a lawsuit should only be conducted in public during the day hours. Their course of action could not stand the light of day. With the name of God on their libs, those hypocrites violated every divine rule. He let it happen because there was no other way to free us. Jesus was tortured and crucified to save people who are evil. Us.

Our peace offering
"The chastisement of our peace was upon him; and with his stripes we are healed" (Isaiah 53:5). Jesus has stated: after three days I will rise again. I have power to lay down My life and to take it up again (John 10:17,18). He indicated how the days should be counted: "today, tomorrow, and the third day" (Luke 13:32). Jesus is the reality of every sacrifice made in Israel, and the meaning of the antitype of the quoted text in Isaiah can be found in:

The host breaks the bread
Sharing meals has always been a very important part of Jewish life. At the beginning of the meal, the traditional blessing is said as the bread is broken. In the Babylonian Talmud, we read: “The host should break bread” (Berakoth 46). However, this Stranger is taking the host’s place: He is saying the blessing and breaking the bread! Probably, this behavior caught the attention of everyone in the house. Where did this authority come from?

A sign of messianic dignity
In Qumran document 1QSa (The Messianic Rule) we read: “No one should stretch out his hand” to bless the bread before the Priest and the Messiah. There was an understanding, at least among the Essenes, that the authority to bless the bread first clearly belonged to the Messiah. When, in our story, this Stranger acted in the house as one that had authority (Mark 1:22) - this behavior was a definite sign of His messianic dignity.

Meaningful details
In a communal Jewish meal, the one who recited the blessing did so while literally breaking the bread – exactly as we are told Jesus did. In this sense, Luke 24:30 might seem like a traditional Jewish meal, indeed. But the details of what the Stranger did, was so significant, surprising and recognizable to the two disciples that they forgot that it is already dark. They ran back to Jerusalem to tell the other disciples that they had seen and talked with Jesus. He had risen, according to the scriptures.

God's love and our declaration of love
We humans will never fully understand what happened on that Thursday and Friday and Saturday 1988 years ago. But that little bit we do understand is enough to exclaim: "Thank You for taking my place, I would have readily succumbed to the fear." Thank You for opening a way by drinking that cup for me, the reproach, the mockery, the torture, accepted silently, that I might be freed. And now, my Lord, the least I can do is to give my loyalty to You, My Jesus, my Redeemer, I love You. Help me live my life in such a way that that love is expressed to you that You might be glorified."

Believing and doing
Jesus gave us a ceremony to remember His act of love: it is not Christmas, Passion Plays, or Pentecost. It is Holy Communion. No procession with a lot of parade in the streets, but a service to each other according to His example, within the intimate walls of "an upper room" .... How beautiful would it be to have Communion on Silent Saturdays? Remembering the Lord's death for our life until He comes? And wash the feet of the homeless with the realization that we humans are all - not one excluded - homeless wanderers in an hostile land.

Adapted from the Newsletter February 2, 2018 of IsraelBiblicalStudies.com